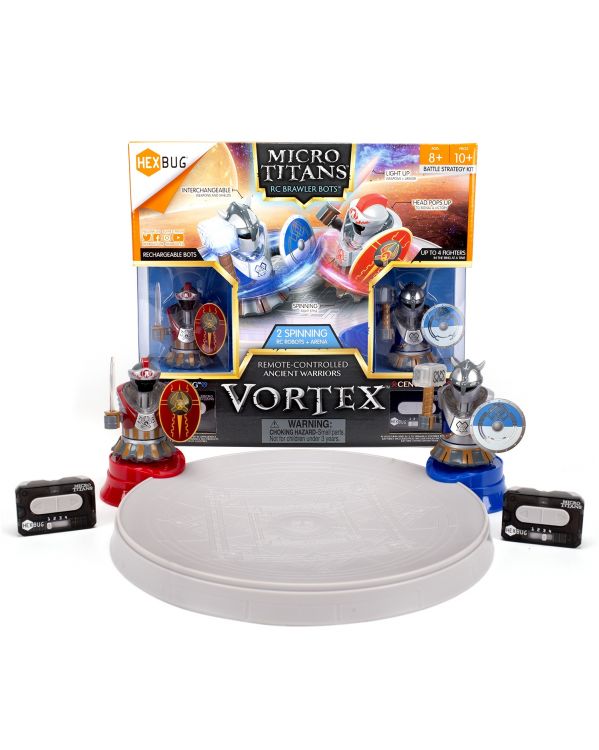 Skip to the beginning of the images gallery
In stock

Micro Titans Vortex
Special Price $63.99 Regular Price $79.99
Add to Wish List Add to Compare Email
Details
Journey across time and space to join the mightiest warriors in the Vortex! Four heroes have been called, now you must select your champion. Arm your remote control fighter with glowing shields and weapons, and spin into combat. Slam your opponent's breastplate to deactivate their energy core and lay claim to your victory! The stage is set and the world is watching.

The Vortex: Adjust the starting pedestals around the outside edge of the vortex and plan your attack each match. The curved shape of the bowl keeps the spinning micro titans in combat until a victor is declared. Ricochet off the centre Power Bump to boost your strike against your opponent.

Energy Core: Press your champions head down to activate the energy core. Watch as light courses through their eyes, breastplate, and weapons. In combat, spin and hit your opponent's breastplate to shut off their energy source and win the battle!

*Up to 4 fighters in the ring at a time. Samurai and Knight sold separately.

How to Play: This remote controlled warrior lets you spin in either direction to collide with your opponent in the Vortex until only one champion remains standing.